The traditional trans story describes a person who must transition from one binary gender to the other to escape extreme gender dysphoria. This may be true for some. But there are many ways to think about and carry out a transition, and they don’t always have to include self-loathing.

Let’s start there. Much of this article will center around the language we use for transitioning. The words we use shape the way we think, and that’s at least half the battle.

There are only two requirements to be transgender: 1) identifying as a gender other than what you were assigned at birth and 2) choosing that label for yourself. You don’t have to transition from male to female or vice versa to be trans. This definition leaves room for genderfluid, multigender, agender, and all manner of nonbinary folks, even if they sometimes identify or present as their assigned gender part of the time.

This means a transition is the process of a trans person adapting to a more authentic experience and expression of their gender. For some, this involves physical transitions involving hormones and surgeries. Some change their pronouns, name, clothes, voice, or behavior. Others don’t change anything but the way they think of themselves.

The success of a transition is based on how comfortable a person feels with themselves. Not on how long it takes or how well someone matches the expectations placed on their current gender. It is a process, not an event. A journey of many steps, not a final destination.

Media portrayals of trans people often misunderstand this. Cisgender (non-trans) writers often depict trans people as dramatically tortured souls who magically undergo transition to become perfect specimens of male or female stereotypes. Real life trans folks are often shown as static before and after photos, rather than human beings constantly in motion. We’re expected to be miserable until we can pass as cisgender and then live happily ever after without causing too much trouble.

These ideas stem from cisnormativity, the assumption that only being cisgender can be normal. When being trans is seen as abnormal and transitioning is interpreted as dangerous and drastic, people think someone would only transition if they were escaping extreme self-hatred or unbearable pain. Something that can only go away once a person is no longer visibly “trans” and blends into cisnormative society without anyone noticing. If someone can’t conceivably understand the trans experience as being positive, they assume it would only be done out of necessity and for as short as possible.

But being trans isn’t a tragedy. We face many problems–which may sometimes include body dysphoria and internal discomfort–but misery is not required to be trans. Someone can feel totally comfortable in their bodies and still identify as something other than what they were assigned at birth. Being trans gives us the chance to escape the small box of expectations other people put us in and instead do what makes us happy. Avoid being too quick to place yourself into another box of what people think you need to be in order to be trans.

How we can help ourselves

So however we approach our transitions, it should be for ourselves and not anyone else. Let’s look at a few ideas about how to do that. None of them are mandatory, and each of them should be a personal choice based on your own circumstances and needs.

As we said before, cisnormative society expects us to hate our bodies, especially our genitals, body hair, and chest. Even for cis people there is an unspoken rule that having “male” characteristics is a form of failure for female-identifying people and vice versa.

None of this is true. Whatever your gender is, that’s what your genitals are, too. Not the other way around. And if you need help reclaiming your parts or encouragement about your body, here’s some thoughts. 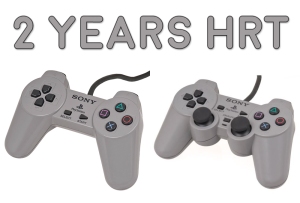 While nobody should start hormones or get surgery to make someone else happy, they are common and valid ways of transitioning. These methods try to align the body more closely with how a person feels internally. These come with their own risks, costs, and benefits that I’ve written on before for folks assigned male at birth and am working on an article for those assigned female at birth.

Over the years, trans folks have come up with a wealth of ways to look more feminine or masculine without medical treatment. From tucking the penis and scrotum to smooth out the crotch to binding breasts to flatten a chest. Some people pack to bulk up their own package or stuff for a more bountiful bosom. Shapewear, tight clothing, and even certain kinds of exercise can help shape with body shape as well.

These methods have traditionally been used to “pass” in public, but they can be just as effective in private to build confidence or combat dysphoria.

From exploring beyond the binary

That feeling of inner conflict between the gender you identify with and the body that you have is called dysphoria. Here’s a list of 32 ways to work through those feelings in a positive way.

One of the best feelings as a trans person is being called by the pronouns and name of your choice. Coming out can be a complicated and frightening process, but it can also transform your day-to-day life on every level. There are reasons to be cautious of doing it, and you are not obligated to ever come out if you don’t want to. But if it’s what you want to do, you will be intoxicated by the freedom to live your life authentically and not have to kept your identity to yourself. You can start out small and see how you like it, and there’s plenty more advice here.

My mentors told me two things when I was transitioning. One told me that I had to go at my own pace and not let anyone else tell me what to do or when. It’s the most important advice I’ve ever listened to.

My other role model told me the first year of transitioning is a “terrifying euphoria.” Mine lived up to that, and so did my friends’. There will be scary times in your transition. They will pass. There will also be breathtaking and gorgeous moments. Soak those in. Savor them. And keep a record of photos and journals if you can.

Gender isn’t something you are; it’s something you do. A performance every day. Transitioning is a long string of practices to get to a place where you feel more comfortable in your own skin. And as with most types of practice, it’s easiest when you are compassionate towards yourself and get help when you need it.